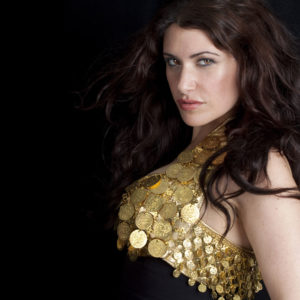 Eden is the only belly dancer in Toronto that is both a professional belly dancer and singer! When you hire Eden, you have a choice of Eden performing a Standard Belly Dance Show or a Belly Dance Show and Singing Combo. To keep the show in a belly dance theme, Eden can sing one or two of her own Pop songs that have a Middle Eastern flavour – Belly and/or All Together Woman Mid East Infusion. Some clients prefer Eden to sing a pop song from a similar artist, such as Shakira.

The standard show is 20 minutes. Audiences generally find that if the show is longer, it is too much of a good thing. Upon client request, Eden can co-ordinate either an Arabic band, Greek band, or a funk/pop band to accompany her show. Eden has much experience performing with all kinds of bands live. The additional fee to hire the band would be determined by the band’s rates.